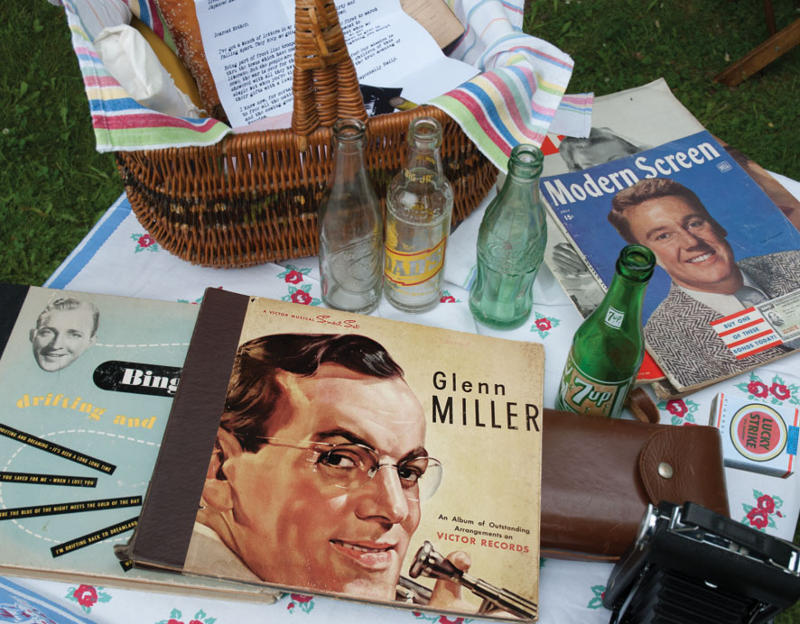 On July 10, 2011, the Palmyra-Eagle Community Band and the Eagle Historical Society presented an ice-cream social and concert that was one of the high points of our year. Almost 30 veterans of WWII made the trip to be honored publicly for their service to our nation, one even traveling in a specially-outfitted ambulance. These veterans were each photographed in front of a poster with pictures of area servicemen from WWII, and each vet present was recognized individually during the program. The band played classic WWII medleys like Sentimental Journey, Remember Pearl Harbor, Boogie Woogie Bugle Boy, and The White Cliffs of Dover, and the audience sang along to the lyrics of well-known numbers like I'll Be Seeing You and Der Fuehrers Face. Two swing dancers from Fred Astaire Dance Studio in Wales cut the rug to Chattanooga Choo Choo and Glenn Miller selections. Director Ed Pierce and Eagle Historical Society head Elaine Ledrowski narrated a war broadcast from fictional WWII radio station KEGL, with announcements-- from the attack on Pearl Harbor, to requests to buy war bonds and save stockings, to the news of V-E day in Europe.

At the end of the concert program, as the over 200 audience members were milling around talking, having last helpings of ice cream and root beer, and expressing their gratitude to the veterans present, band director Mr. Ed Pierce and more than one band member heard comments from listeners like: 'You've outdone yourself with this concert!', 'Do you have a CD of your music?', 'When are you going to make a CD?'. That hot day in Eagle Park in July set the band to thinking. Since our audiences keep asking, why don't we try recording a CD!

In 2012, we decided to make that dream a reality, and start our CD-project The 40s: A Sentimental Journey.

World War II was the first large-scale conflict where radio played a significant role both on the war front and the home front. The ability to reach a larger audience through radio inspired a mini-boom of patriotic war anthems, as well as WWII-associated love songs. Back home in 'the States', citizens heard many of these songs in movies and newsreels, but they also delighted to hear them in parades and community-events played by local bands and music groups that have always been part of small-town America. The Palmyra-Eagle Community Band, starting from our 2011 Veterans concert in Eagle, has expanded our effort to locate original band versions of 1940s classic songs, and a selection from this repertoire will provide the material for our 2012 CD project The 1940s: A Sentimental Journey. Some of these pieces will be featured at our 2012 concerts. 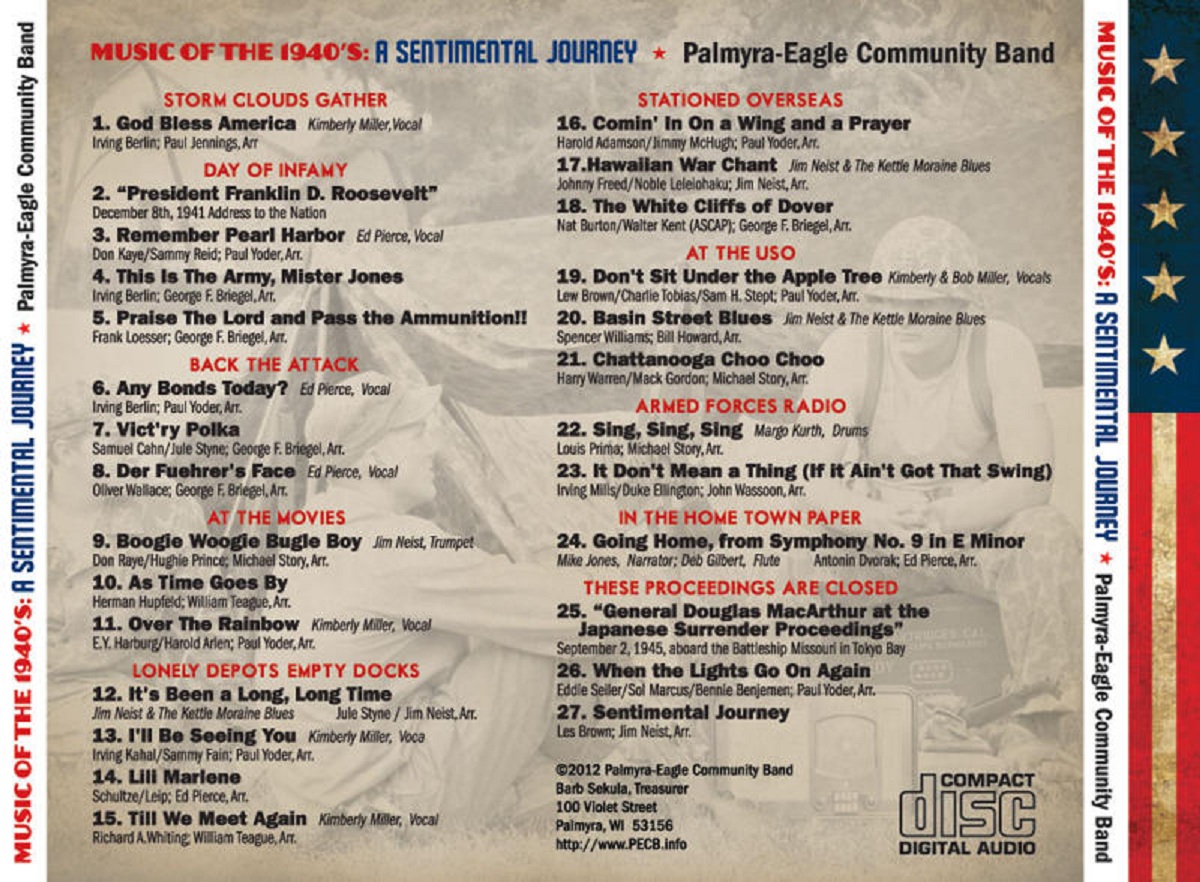 Every family has husbands, wives, parents, or grandparents who directly served in the Armed Forces, or who provided significant support to the war effort. Some of these who served paid the ultimate sacrifice of their lives. The families of the Palmyra-Eagle Community Band are no exception to this record of service. As part of our CD project, the band collected photographs and other memorabilia of family members of theirs who served in the Great Wars. The faces of these service members are displayed on the inner jacket of our CD. We are also displaying them, and providing names and other helpful information here on the website, where there is room for more details.

Click Here or on the photos below to enter our WWII Photo Gallery Memory Book!

The following sponsors generously donated to our CD project, and are appreciated in the CD-liner insert as well as here on the PECB website.

Thanks to our Compact Disc Sponsors!

The Performers, Artists and Engineers Involved in the Project

Producing The 1940s: A Sentimental Journey took a talented combination of musicians, audio engineering, and artistic design work. The following are some of the major ones who devoted their talents and professional skills to our project.

How to Order a CD

If you would like a copy of the CD click on the Purchase CD button on the top of this page and choose from one of the providers listed.